In Islam, it is obligatory for Muslim persons to have a Will to ensure that one’s estate is administered in terms of Shariah Law. This is especially necessary where the Islamic laws of inheritance is not the law of the land. In South Africa, Shariah law is not automatically implemented and regulated. It is therefore important to have your estate in order and to have your Will drafted in accordance and in compliance with Shariah law, so that on death your estate will be administered in terms of Shariah law.

South African law of succession vs Islamic Law of Succession

Shariah law of inheritance differs considerably from South African law of succession. In South Africa, if a person dies without leaving a Will, he/she dies intestate and his/her estate would be administered in terms of the  Law of Intestate Succession, which is regulated by the Intestate Succession Act 81 of 1987 and which will dictate who may inherit from the deceased and what share of the estate the heir should inherit.

In Islam, the issue of whom and how one inherits are prescribed by the Quran. In South Africa, the law recognises the freedom of testation, which means that the testator decides how his/her estate will be wound up after death. In order to execute a valid Will in South Africa, whether it is a Shariah compliant Will or not, any Will drafted must comply with the provisions of the Wills Act 7 of 1953 as amended. South African law does permit a Muslim person to specify in the Will that his/her estate must be distributed in accordance with Shariah law.

Shariah law in respect of inheritance

Inheritance is considered as an integral part of Shariah law. Muslim persons inherit from one another as stated in the Quran. Upon death of a Muslim person, there are certain matters that must be attended to before the heirs can inherit from the estate. These are the funeral expenses and debts of the deceased which must be taken care of before any heir can inherit. It is only once these matters have been taken care of can the remainder of the estate be distributed in terms of Shariah law.

The Quran fixes the shares of each individual. In accordance with Shariah law only relatives with a legitimate blood relationship to the deceased are entitled to inherit. The testator is however allowed to bequeath one-third of his estate to anyone he/she wishes. This is called a wasiyaah, which can only be bequeathed to a person/charity that would not ordinarily inherit from the remaining two-thirds of the estate in terms of Shariah law. If the bequest is however made to an heir, it will be subject to the approval of the remaining heirs and it is important to note that the Quran provides a rule that a son’s share must be twice that of the daughter’s share.

For more information on Islamic law of inheritance, the drafting of Wills and Shariah compliant Wills, please contact our Rifqah Omar at r.omar@bissets.com or call our offices on 021 441 9800. 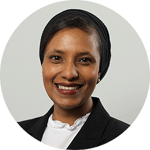